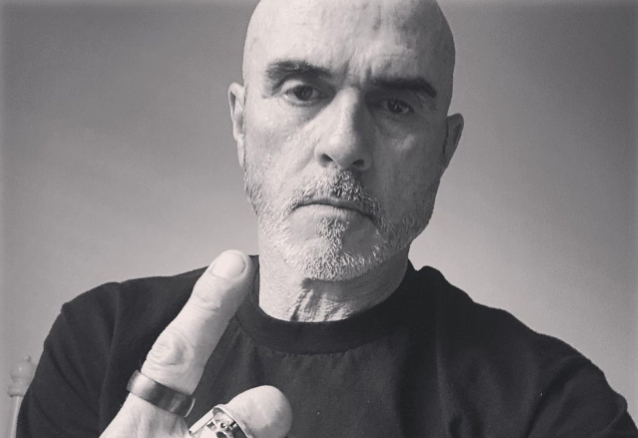 He wrote: “I entered the hospital Thursday to be treated for Covid. I contracted the virus from a friend who was unaware he was carrying it. I am feeling much better but my lung capacity at this time is diminished. My oxygen absorption is good and all my other symptoms have gone away. I will have a recovery period that will take some time.

“I’m sorry we have had to make adjustments to our schedule but at this time I cannot perform to the level our fans and the band expect and deserve. This will only be temporary and VIO-LENCE will be back onstage better than ever.”

Killian underwent a successful liver transplant surgery in March 2018. The year before, Killian was diagnosed with stage four liver cirrhosis, which was caused in part by a genetic condition called hemochromatosis.

VIO-LENCE debuted a new song, apparently titled “Upon Their Cross”, during their August 6 concert at Strummer’s in Fresno, California. The track will appear on the band’s upcoming EP, “Let The World Burn”, which is due in early 2022 via Metal Blade Records. The effort was recorded at Trident Studios in Pacheco, California with producer Juan Urteaga, who has previously worked with TESTAMENT, MACHINE HEAD and EXODUS, among many others. Mixing duties were handled by Tue Madsen.

In August 2020, VIO-LENCE released a new digital single, “California Über Alles”, a cover version of the DEAD KENNEDYS classic. The band also filmed a music video for the song with director Scott Kirkeeng.

The band performed its first comeback concert in April 2019 at the Oakland Metro in Oakland, California and spent most of the ensuing months playing select shows in the U.S. and Europe.

Although MACHINE HEAD frontman Robb Flynn was part of VIO-LENCE‘s classic incarnation and played on the band’s debut album, “Eternal Nightmare”, he wasn’t approached about taking part in any of the comeback shows.