Watch JOURNEY Perform At ‘We Love NYC: The Homecoming Concert’ 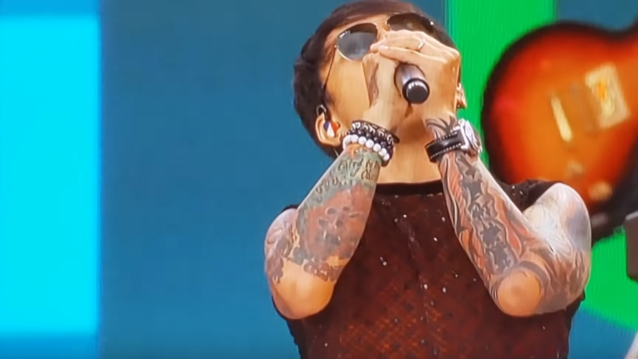 On Saturday (August 21), legendary rockers JOURNEY performed on the Great Lawn at New York City’s iconic Central Park as part of the “We Love NYC: The Homecoming Concert”.

The event, produced by music executive Clive Davis in coordination with the city of New York and Live Nation, was witnessed by a vaccinated crowd of 60,000 and was meant to be “a celebration of New York City’s comeback” after a challenging 17 months marked by the COVID-19 pandemic, according to a press release.

About 80% of the tickets for the event were distributed free of charge. All attendees who were age 12 or over were asked to present proof of COVID-19 vaccination. Children who were not yet eligible for vaccination had to provide proof of a negative COVID test.

JOURNEY made its return to the live stage on July 29 during a special “aftershow” at Chicago’s Aragon Ballroom. The concert took place just two days before JOURNEY‘s appearance at Lollapalooza on the Bud Light Seltzer stage at Grant Park.

JOURNEY‘s lineup for all three shows included the return of drummer Deen Castronovo, who shared the drum duties in the band with Narada Michael Walden. Walden, bassist Randy Jackson and keyboardist/backing singer Jason Derlatka all joined JOURNEY last year following the band’s acrimonious split with drummer Steve Smith and bassist Ross Valory. Jackson — who previously played with JOURNEY during the mid-1980s — was forced to miss the Aragon, Lollapalooza and “We Love NYC” gigs because he was scheduled to undergo back surgery. Filling in for him was Marco Mendoza, who previously played several shows in 2019 with Castronovo and JOURNEY guitarist Neal Schon under the “Neal Schon’s Journey Through Time” banner.